In later years the organ developed so many problems that the decision to remove it was made in 1995. The organ was stored in parts in several locations on campus and was offered for sale through sealed bid process as State surplus in October of 1998. George Perks was the successful bidder and started moving it right away. It took about 5 weeks of part time work to get it all moved. George, together with his two high school age boys, started figuring out how it all went together soon thereafter.

There was no wiring with the organ. George and his sons built diode cards and rewired the relay, chests and much of the console. The first notes were playing by early February, 1999. By March, all 16 ranks were playing.


In July 1999, George also purchased the 2/ Wurlitzer from the residence of the late Beth Adkison of Port Orchard, Washington. This organ was originally from Astoria Oregon's Astoria Theatre. Parts from this instrument were combined with the Kimball.

In 2001, George acquired the two-manual Robert Morton originally from Spokane's American (Post Street) Theatre. He purchased the instrument from the owners of the former Harold Currier residence in Spokane's South Hill neighborhood. 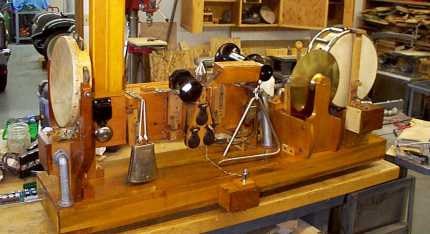 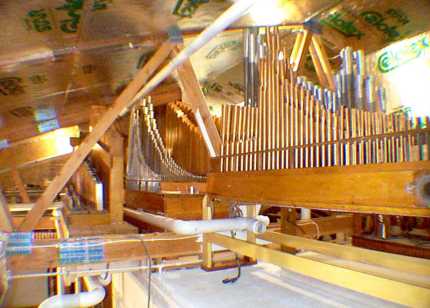 Always room for more ranks! George now has an "Echo" division in the loft.

By 2005, George decided to liquidate all three instruments. The Kimball was donated to Seattle's Pipe Organ Foundation who later shipped it by sea container to a cathedral in the Philippines. The Wurlitzer was sold to a party in Belgium! Disposition of the Robert-Morton is unknown. From a Spokesman Review feature article by Isamu Jordan 9/14/2000


George Perks is no surgeon, but he knows how to put your organs back together.

Pipe organs, that is.

Especially if they were built at the turn of the century.

Perks, 52, has three refugee organs in the two-car garage/workshop of his Mead home.

"It's kind of a rescue," Perks said. "(The organs) were threatened to end up in a scrap yard."

None of which Perks can play.

His musical virtuosity peaks at accordion lessons he had as a child.

But that hasn't stopped him from taking in the strays.

Perks is not one to allow something good go to waste. Also in his garage he is restoring three classic automobiles.

The Kimball is a theatrical organ that added sound effects for silent movies of its day. The instrument is loaded with more than 20 voices that connect to a glockenspiel, chrysloglott, a xylophone and various drums.

The rhythm section sounds from ceiling mounts in the shop.

Perks was helping restore a pipe organ at the First Church of the Nazarene, 9004 N. Country Homes Blvd., more than a year ago when he caught wind that EWU had the organ hulk in storage.

Perks investigated, thinking the parts might come in handy at the church. He ended up buying the organ through a silent auction for $502.

The organ used to be a feature of the Showalter Auditorium at EWU.

Repairs would have cost the university $60,000.

Transporting the organ from Cheney to Spokane, Perks said, was nearly as challenging as putting it together.

He first had to locate all the pieces, which were scattered though various buildings on the EWU campus.

Some were stored in attics 40 feet above the floor.

"We had to climb up there, take things completely apart and then lower them from the balcony," said Perks, who enlisted his two sons to help with the quest.

"We had been doing this every night after school," said Perks' 19-year-old son, Brian. "I said, `Dad I'm about organed out."'

Once they gathered all the odds and ends, it took 17 trips in three weeks before Perks was tripping over pipes and cables in his workshop.

He began putting the organ together like a giant jigsaw puzzle. Trouble was, there was no picture on the box to guide him. But he managed.

"Once you tear it apart, you learn how it is put together and how it works," Perks said.

Perks, the superintendent of thermal operations for Avista Utilities, has rebuilt, re-leathered and rewired practically the entire organ. He even added a few special modifications of his own.

Like the "Russ Box," the R2-D2 of organ tuners. The device is named after Perks' friend who usually sits at the keyboard while Perks tinkers with circuits in the next room. The circuits transmit signals from the keys to the pipes.

Perks rebuilt cables from telephone wire for the circuitry.

The organ is not entirely finished. But that's hard to tell, from the loud, vibrating whistles of the pipes when Perks strikes a key.

And when he flips a light switch on the wall, his entire shop comes to life.

From above, the glockenspiel chimes, and drums bang in time with the tambourine while Perks shares a bit of what he has learned. The music is a bit choppy, but charming nonetheless.

Nothing fancy, just a few chords from the theme to "Phantom of the Opera," a little "Deck the Halls" and Ernest Gold's "Exodus."

But from the belly of an instrument that extends a pipeline in three rooms of the shop, the sound is impressive, even if a bit out of tune.

But Perks said having the colossal sound hidden away in a garage is a real disservice to the community.

While he is till in the process of fixing them, he does so in the hopes of finding them a permanent.

"It really needs to be where (there's) someone who knows how to play it for people who know to appreciate it," Perks said. "It's a waste of a lot of people's skills to be sitting here."